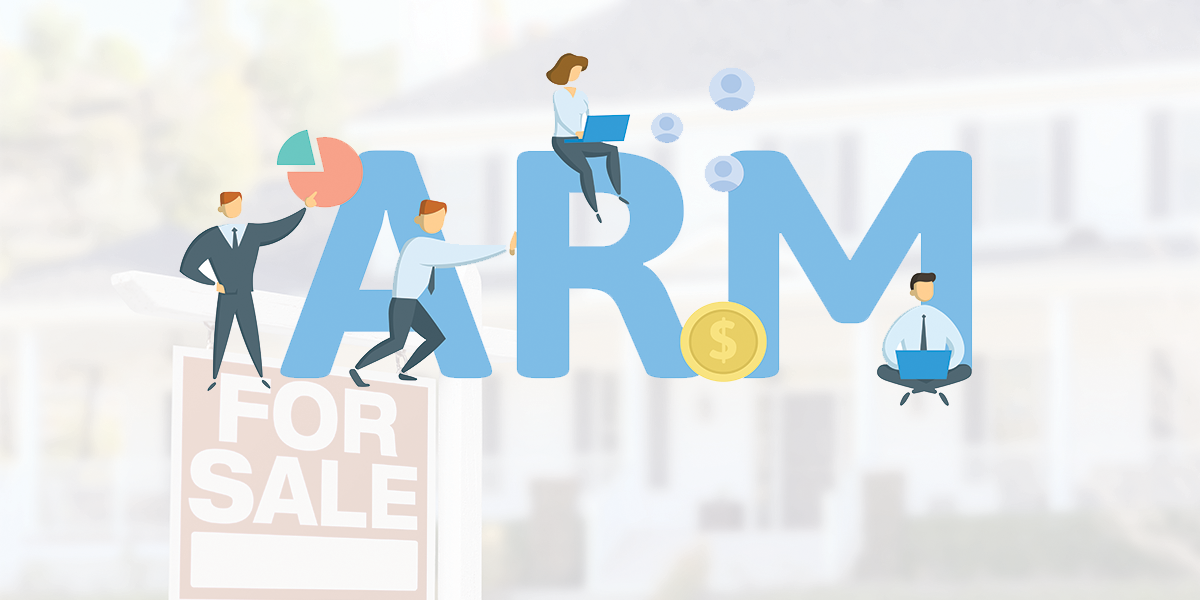 Each month we ask clients to spend a few minutes reading through our newsletter with the goal of raising their investor IQ. This month we focus our conversation on the Federal Reserve’s interest rate hikes and the potential impacts on the housing and mortgage markets.

Investors are concerned about the potential impact of The Fed’s rate hikes on existing mortgages. While most people are familiar with traditional fixed mortgages where the lender sets the interest rate for the life of the loan for 15-years, 20-years, 30-years. Adjustable-rate mortgages (ARM) on the other hand are mortgages where the rate is fixed for a period of time (5-years, 7-years…) and then the rate will fluctuate annually after the fixed period of time. Most of the time, ARMs offer lower rates than traditional 30-year mortgages but leave the borrower potentially subject to significantly higher payments in the future if rates rise. If rates later rise, the borrower will not gain a significant advantage by refinancing.

Now, let’s review ARMs and 30-year mortgages rates. As shown by the following chart, these two types of mortgages are highly positively correlated. Meaning that when mortgage rates are low, consumers favor a fixed rate mortgage, where they can lock in a low rate. When mortgage rates rise, consumers become more willing to take a risk and take an ARM, with the hope that rates will eventually fall. Mortgage rates have been in a steady downtrend from the early 1980s up until the end of 2021. This has allowed home buyers to lock in low fixed rates over the past 12+ years. As you can see in the following chart, ARMs have only accounted for 0-5% of total mortgage applications since 2008. This number has risen to 9.3% on 6/30/22, as mortgage rates have had a sharp rise. Overall, this data tells us that the majority of current homeowners have locked in low rates, and in-turn, lower monthly payments for the next 15-30 years! From a consumer perspective, this frees up more cash flow to spend, invest and offset the temporary impacts of inflation. “According to the Federal Reserve, U.S. households have ~$12 trillion in mortgage debt, with only 3.7% of this amount having adjustable rates.” (First Trust - Monday Morning Outlook, “Mortgage Reset Alarmism is Off the Mark”, 7/11/2022). This data confirms our thesis that current homeowners stand in a strong financial position and only current buyers and sellers will be impacted by the recent rise in interest rates. 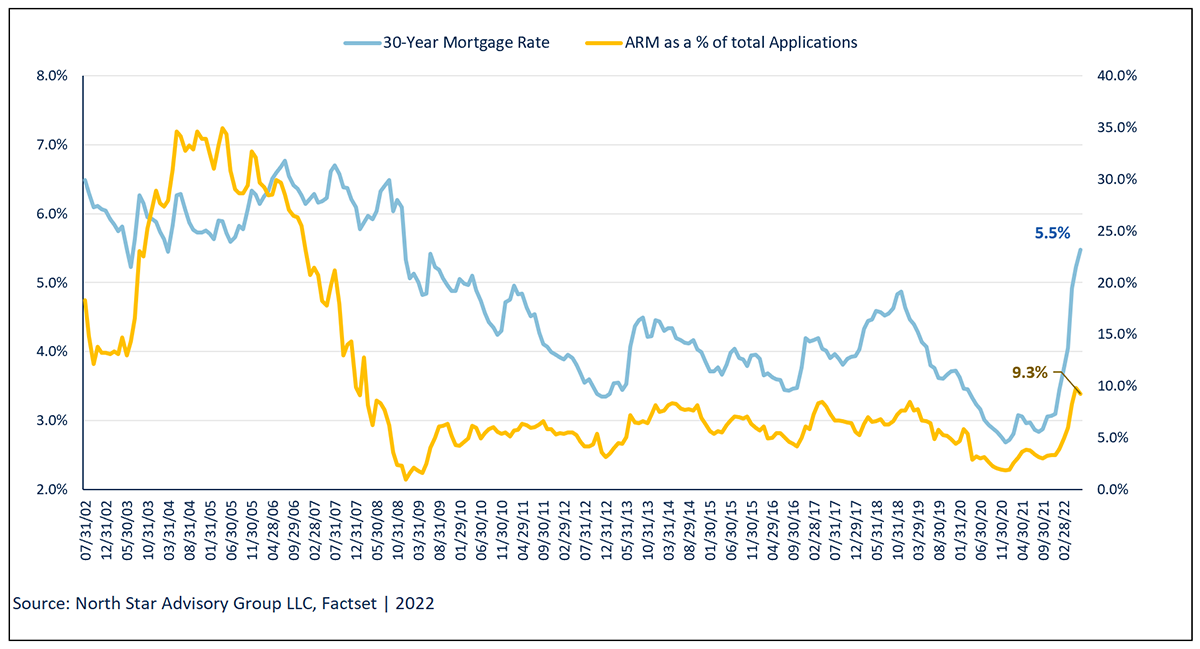 Piggybacking off the adjustable rates commentary, let’s focus on the past two and a half years. As mentioned previously, mortgage rates have been in a steady downtrend for the past 40 years. This downtrend became accelerated on the heels of the COVID-19 pandemic. While consumers were still locking in lower fixed rates after the Global Financial Crisis and Pre-COVID (2009 – Early 2020), this accelerated fall led to an opportunity to refinance and lock in even lower fixed rates. These two data points display negative correlation. This means that when mortgage rates decrease, the amount of people who want to refinance increases, and vice-a-versa. This relationship can be seen in the following chart. During the COVID-19 pandemic, 30-year mortgage rates bottomed out at 2.7% and remained in a range 2.7% - 3.5% for more than a year. Current 30-year mortgage rates have virtually doubled to 5.5% as of 6/30/22. While we see consumers adjusting their home purchasing habits from the past few years, we are really resuming a normal interest rate environment. Over time we believe that consumers will adjust to higher rates. The consumer adjustment will also lead to lower refinance applications, which is currently causing initial layoffs in the mortgage labor market. 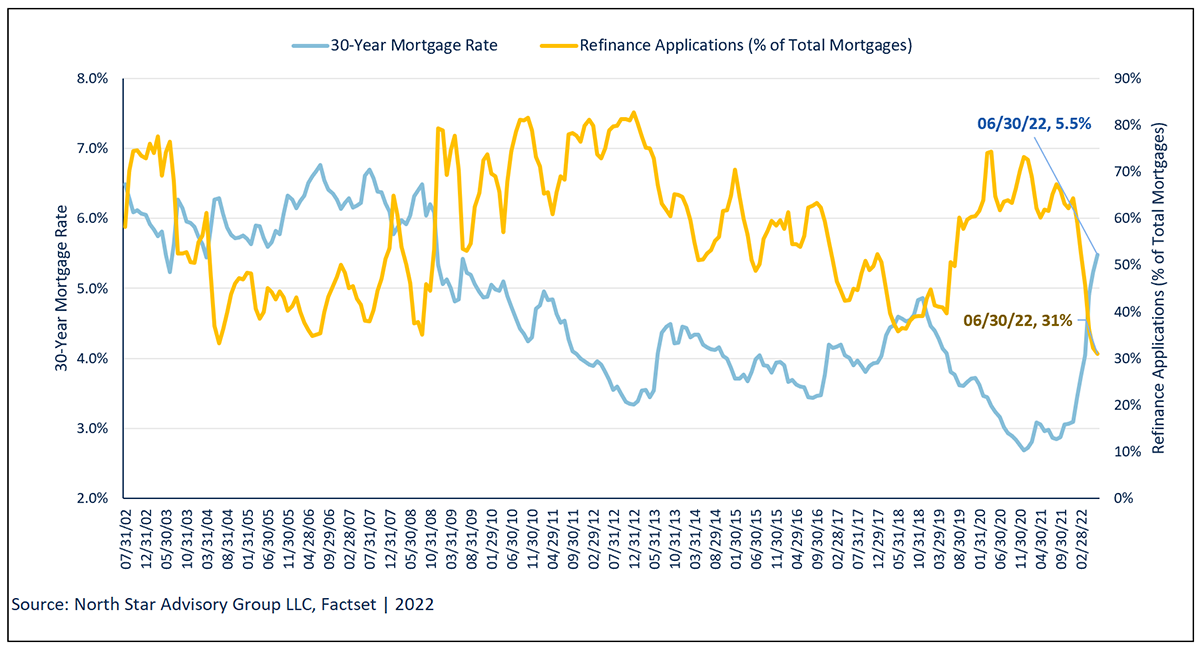 Overall, when combining the refinance and adjustable-rate analyses, we are not predicting home price collapse similar to 2008. We also don’t see widespread systemic/unsustainable mortgage debt that will derail consumer finances and current homeowners.

While we don’t believe there is sustained risk built into the current $12 trillion in current U.S. mortgage debt, we are concerned about potential new home buyers. As mortgage rates have risen in to 5.5% as of 6/30/2022, we review the potential implications for housing prices and new home sales.

As mortgage rates hit record lows in 2021, home values soared. When calculating a monthly mortgage payment, the interest rate and purchase price are two of the three primary driving factors. According to the National Association of Realtors (NAR), the median new mortgage size is ~$420,000 as of 6/30/2022. Assuming a 30-year fixed mortgage, the current monthly payment equates to $2,381 at 5.5%. When you compare the current payment to median household income provided by the NAR (National Association of Realtors), the mortgage payment accounts for 32.0% of monthly pre-tax income. Compared to January of 2021 when rates were at 2.7% and the median new mortgage size was ~$376,000, the monthly payment was $1,523 or 21.6% of gross income. This illustration can be seen in the first chart below.

The NAR Housing Affordability index gives a broad view around the affordability of new housing buys. There are three components that drive this index; median income, median housing prices, and monthly payment as a % of median income. NAR’s rule of thumb says that on average, your monthly payment should be equal to or less than 25% of gross income. The combination of home values rising at almost twice the rate of income over the last 20 years and mortgage rates doubling in 2022 has caused the affordability index in the following chart to reach its lowest value since 2006. For new purchase affordability to become sustainable, we need to see a combination of the following:

We have been closely watching the following technical trend of the S&P 500 in blue that has been driving the market more than fundamentals/earnings. Bollinger Bands show the upper and lower ends of a well-defined trend and are shown in red on the following chart since January 2022. The March 2022 move out of the channel was a false breakout often referred to as a bear market rally. From Mid-May through Mid-June, the first orange line is showing the bottom-line resistance of a pennant shape, wedge or “>.” A breakout above or below these levels tends to lead to additional price momentum in the breakout direction, which, in this case, was lower. The second orange line in Mid-June to now appears to have held the closing lows on the bottom and July 19 was the first above the pink line / top end of the pennant. This could lead to additional upward momentum for the market. If the market is able to push through the S&P’s 50-day moving average (green line), we may see an additional momentum building. Then we start looking at the 100-day and 200-day moving averages as our next upside targets. 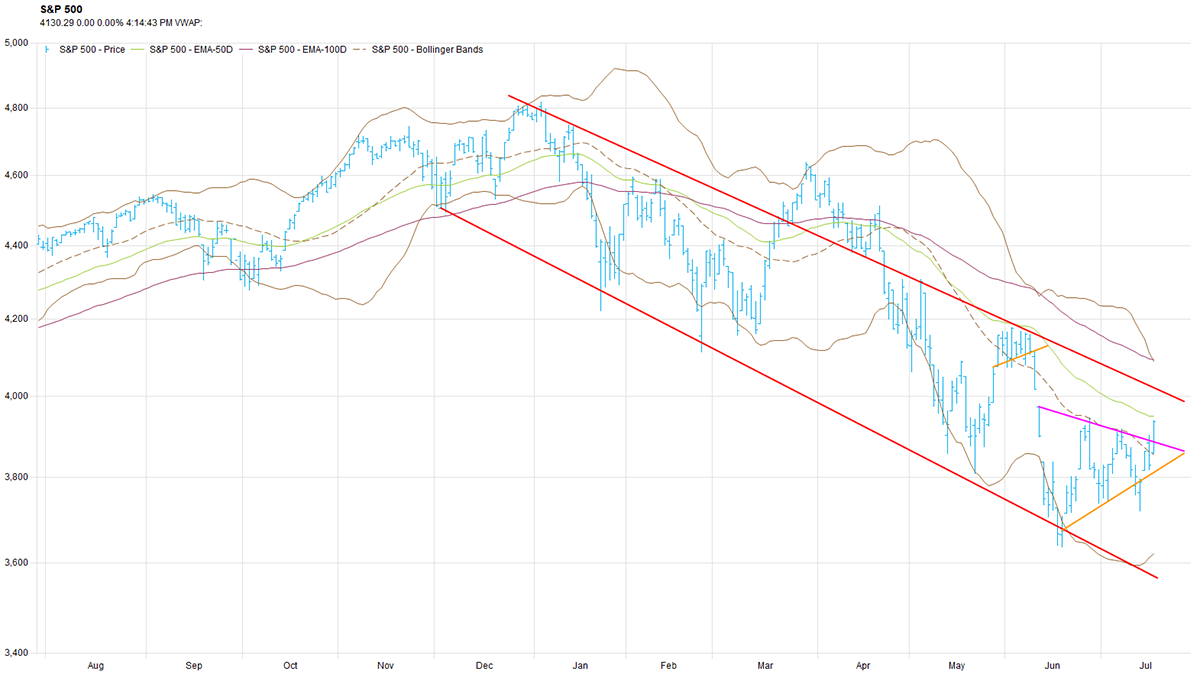 One of the primary reasons stocks have put up miserable performance numbers this year stems from the tighter monetary policy of the Federal Reserve. For that reason, we found it ironic that on all four days the FOMC has hiked rates this year, stocks rallied. On 3/16, the Fed kicked off the current rate hike cycle with a 25 bps increase in the Fed Funds rate, and in response, the S&P 500 rallied 2.2%. Seven weeks later, the size of the rate hike doubled, but stocks still rallied with the S&P 500 surging just under 3% in what turned out to be the second-best day of the year. Six weeks later on 6/15, in response to the mirage of surging inflation expectations in the Michigan sentiment report, the Fed dropped a 75 bps hike on the market and yet stocks still managed to rally with the S&P 500 rising 1.5%. Six weeks later on 7/27, the S&P 500 rallied 2.6% after the Fed dropped a 75 bps hike on the market and hinted that another 75 bps hike was potentially on the table for the next hike if necessary. The Fed is communicating that the need for future rate hikes may be diminishing and ironically during the past few rate hikes, the 10-year treasury has fallen from 3.5% to 2.66% and mortgage rates have come down from 5.8% to 5.3%!

In other words, the S&P 500 is down 12.6% this year, but if you had only invested in the market on days when the FOMC hiked rates, you would be looking at a YTD gain of 9.6% in just four days. Conversely, if you had avoided the market on those three days and been long the rest of the year, you’d be down 22% YTD. Nobody ever said investing was easy or the market had to make sense.

On Thursday July 28, it was announced that the US’s GDP fell 0.9% in the second quarter, the second straight decline that follows a 1.6% decline in the first quarter and was worse than the Dow Jones estimate for a gain of 0.3%. The S&P 500 finished up 1.2% for the day. While two consecutive quarters of negative GDP are generally considered a recession, there is no exact formula. Instead the National Bureau of Economic Research (NBER), which dates U.S. business cycles, define a recession as an economic contraction starting at the peak of the expansion that preceded it and ending at the low point of the ensuing downturn. Recessions typically produce declines in economic output, consumer demand, and employment. The NBER considers indicators including nonfarm payrolls, industrial production, and retail sales, among others, in designating the start and end of U.S. recessions, usually months after the peak and trough of the business cycle. The NBER will have a hard time identifying the last 6 months as a recession with low unemployment and high consumer demand.

While markets may once again test recent lows, we expect the continued economic outlook to remain strong enough to minimize future downsize risks to the market. While fears of a recession have continued to climb, it is unlikely that we will see one in 2022 and if we do, it will likely be very shallow. Looking forward, we continue to see the risk of recession as low. However, an economy can talk itself into a recession if we are not careful. Currently, businesses are reducing hiring and few are eliminating current employees. Businesses and consumers are also coming into the potential slowdown with record levels of cash and record low rates on their debt. Businesses with cash will likely push to retain their employees due to labor market concerns, which in turn will likely help to keep unemployment low. We expect consumers will continue to utilize their spending power from cash with the comfort that the majority of those who are employed will retain their jobs and continue to spend from recent pay increases and mortgage refinancing discussed above.

We still believe we are in a secular bull market, which started in 2010 and typically lasts around 15-20 years. However, this secular market is likely to last longer due to a slow start in 2010-2013. It is not uncommon to have bear market pullbacks inside of longer secular bull markets. We saw a bear market in 2020 due to COVID and the markets entered and exited bear market territory twice already in 2022 (May & June).