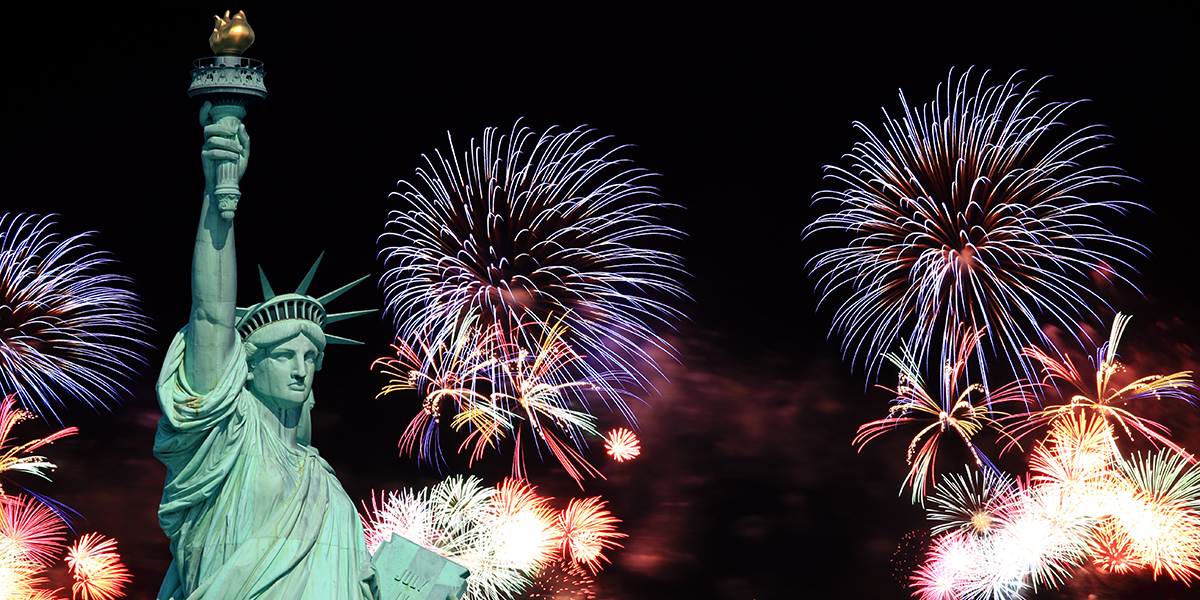 Each month we ask clients to spend a few minutes reading through our newsletter with the goal of raising their investor IQ. While households across the country are traveling and celebrating 246 years of independence, we take a less technical perspective on the markets and economy.

We consider the following to be two of the best pieces of advice that have ever been given to investors:

“Be fearful when others are greedy and greedy when others are fearful.” – Warren Buffett “Buy when there’s blood in the streets, even if the blood is your own.” – Baron Rothschild, 18th century British nobleman & member of Rothschild banking family.

Both of these sentiments not only direct investors away from emotion-driven investment decisions, they remind them: do the exact opposite of your instinct. Portfolio management consists of making investment decisions in both the good times and the bad by focusing on the intrinsic value of the underlying investments. Every dollar invested should be treated as a business transaction. If you would not personally buy the business based on the current financials and outlook for the business, you should pass on the investment.

Over the past two years, we have had an increased volume of conversations regarding clients’ inquiry to invest into a business or asset that does not have a favorable risk/reward ratio. To the credit of our clients, they continue to reach out with their questions and seek our guidance on all investment decisions.

Finally, while contrarian investors historically have made their best investments during times of turmoil, this type of investing still does not mean that you can throw caution to the wind and avoid fundamentals. After going through times of disorder, the financials of the company many not look the same as they did going into a crisis. For example, some companies took on large amounts of debt to survive COVID and a few just made horrible business decisions. NSAG believes that all investors can have a long-term outlook for at least part of their portfolio. Through individual conversations and specific planning, we can help you identify which parts of the portfolio and how much.

While it is always okay to wave the white flag and ask for guidance to review allocations, tweak investment strategies and update retirement cash flow projections. It is typically not prudent to wave the flag and go all to cash or bonds permanently. The risks of timing the market reentry and inflation eroding purchasing power remain too high.

Kangas & North Star has followed both Buffett and Rothschild’s advice over 20 years. While NSAG has many additional overlays to our research and investment process, we have found that adding the following question in particular has helped clients remove emotion from the investment process.

If everything you own right now was turned into cash, would you buy the same thing again?

By asking this question virtually every day, investors (and North Star) are able to suppress the risk of trading on emotion or speculation and focus on fundamentals. In the long-term, a portfolio that is diversified and focuses on fundamentals tends to have less volatility and less client stress.

COVID hit the global economies like a boulder hitting a pond. While the initial impact of the boulder is gone, the reoccurring economic ripples will be felt for years to come. The United States is experiencing a travel boom as consumers trade buying goods for social experiences (travel, entertainment and eating out). The travel demand is so high in the United States, that many households have shifted or delayed their plans which should extend the travel demand. Internationally, Europe is starting to follow in the spending footprint of the United States, but they have been slightly delayed due to their concerns over energy costs and the war in Ukraine. Finally, we have the sleeping dragon of China and their zero COVID polices that have prevented their citizens from global travel and spending. The severity of their lockdowns will likely lead to an even larger boom in travel and potential spending as we head into 2023 and 2024.

While the decline in the global markets in 2022 have been swift, they have followed historical patterns of a decline that equals approximately 50% of the previous fall (2020). Going forward we would not be surprised to see a similar 50% smaller fall for subsequent pullbacks as we work towards new highs and blue skies.

We’re not already in a recession

In June, we had a chance to sit down with Brian Wesbury, Chief Economist at First Trust Portfolios L.P. to get his take on where the US economy stands and where we are likely headed. This week, Wesbury provided the following commentary to NSAG as we head into July.

Real GDP declined at a 1.5% annual rate in the first quarter and, as of June 24, the Atlanta Fed’s “GDP Now” model projects zero growth in Q2.

We still think real GDP will turn out to be positive in the second quarter, but if you take the Atlanta GDP Now model at face value, it superficially appears that the odds of having two consecutive quarters of negative growth are close to 50%. That’s important, because two consecutive quarters of negative growth is a rule of thumb that many people use for a recession.

We believe a recession is coming but the US is clearly not in one yet. In the first five months of the year, manufacturing production is up at a 6.6% annual rate, nonfarm payrolls are up at an average monthly pace of 488,000, and the unemployment rate has dropped to 3.6% from 3.9%. Meanwhile, in April, both “real” (inflation-adjusted) consumer spending and real personal income (excluding transfers) were at record highs. If this is a recession, we could use more recessions.

It’s also important to recognize that real gross domestic income (real GDI), an alternative measure of economic output, rose at a 2.1% annual rate in the first quarter. The public pays very little attention to GDI because the government usually takes an additional month to report that data, after GDP is initially released. But, over time, GDI is just as accurate as GDP in describing the performance of the economy.

We’re not saying everything is fine with the US economy. Obviously, inflation is taking a huge bite out of people’s earnings. But the debate about whether we’re in a recession should be about real economic pain, not academic-style semantics or whether we fit some technical definition. That’s the reason the official arbiter of recessions, the National Bureau of Economic Research, weighs jobs, manufacturing, and real incomes, when assessing whether we’re in a recession, not just real GDP.

We suspect that some of this debate is political, with some chomping at the bit to claim there’s a recession because they know it hurts the party of the incumbent president in a mid-term election year.

Again, we expect a recession, with a lag, after monetary policy gets tight. And tight it must get in order to wrestle inflation back down toward the Federal Reserve’s 2.0% target. But that means a recession starting in late 2023 or in 2024, not now.

Even more unlikely is the notion that the US is on the cutting edge of a recession like the one in 2008-09. Bank capital is well above regulatory requirements, and we don’t have a mark-to-market accounting rule that will generate a “fire sale” in bank assets. Nor are we about to have a government lockdown of the private sector, like in 2020.

When it comes, the recession will cause economic pain for many. Recessions always do. But we expect something like the recessions in 1990-91 or 2001, when the unemployment rate went up about 2.0 to 2.5 percentage points, not like the soaring unemployment of the Great Recession or the 2020 Lockdown.

We continue to expect the global markets to feel like many of the European roads that are paved with cobble stones. While charming, the ride is quite bumpy depending on your mode of transportation. Vehicles with wider, bigger and more tires (diversified portfolio) will likely enjoy a smoother ride as compared to a unicycle (concentrated portfolio). While markets may once again test recent lows, we expect the continued economic outlook to remain strong enough to minimize future downsize risks to the market. While fears of a recession have continued to climb, it is unlikely that we will see one in 2022 and if we do, it will likely be very shallow. Looking forward, we continue to see the risk of recession as low. However, an economy can talk itself into a recession if we are not careful. Currently, businesses are reducing – but not eliminating – hiring. Businesses and consumers are also coming into the potential slowdown with record levels of cash. Businesses with cash will likely push to retain their employees due to labor market concerns, which in turn will likely help to keep unemployment low. We expect consumers will continue to utilize their spending power from cash with the comfort that the majority of those who are employed will retain their jobs and continue to spend from recent pay increases and mortgage refinancing (more on this subject in August’s Timely Topics).

We still believe we are in a secular bull market, which started in 2010 and typically lasts around 15-20 years. However, this secular market is likely to last longer due to a slow start in 2010-2013. It is not uncommon to have bear market pullbacks inside of longer secular bull markets. We saw a bear market in 2020 due to COVID and the markets entered and exited bear market territory twice already in 2022 (May & June).