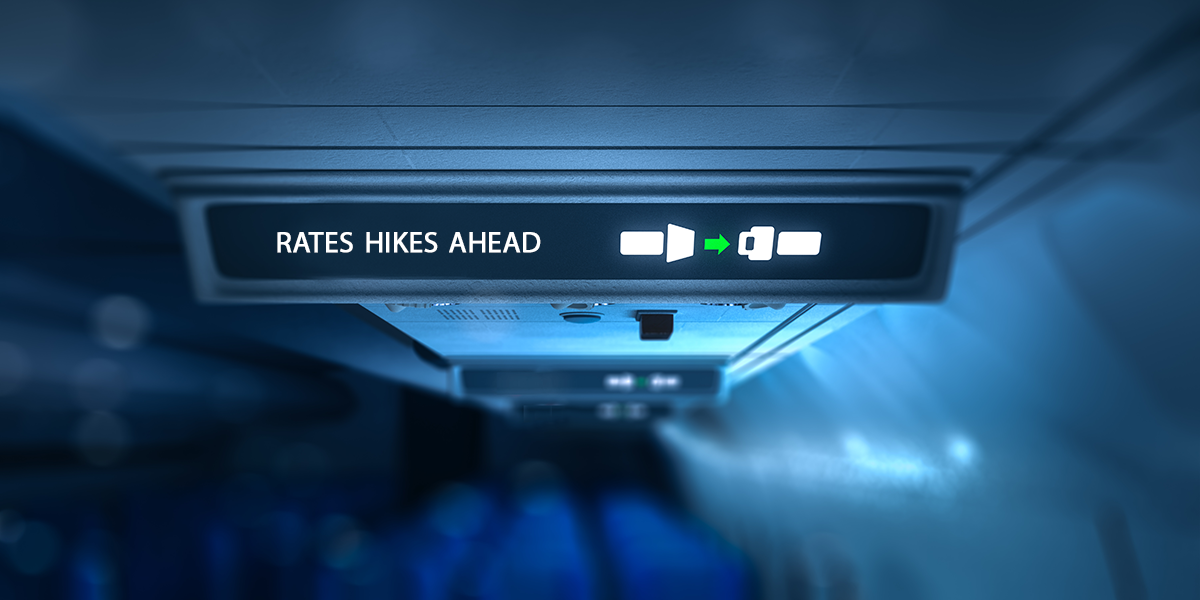 Each month we ask clients to spend a few minutes reading through our newsletter with the goal of raising their investor IQ. This month as interest rates start to climb, we focus on bear markets, corrections and the strength of the consumer.

We hope you have remained seated with your seat belt fastened as volatility has continued to be the theme throughout 2022’s first quarter. Let’s take a step back and look at different market segments from a 30,000-foot view. In the industry, it is typical to define corrections as a greater than 10% but less than 20% decline from the most recent peak. We classify bear markets as a decline of 20% or more from its peak. So, when you hear people or articles say, “Stocks are in a bear market!!!,” it is important to go one level deeper, to identify where segments of the market currently stand. The S&P 500 does not define the entire stock market, nor does the Dow Jones Industrial Average, and so on and so forth.

In the table below, we break down different the year-to-date (YTD) returns and performance since each respective segment’s peak. We also include the YTD change through March 14th for reference due to the quick changes in the various markets. By looking across segments we can clearly see that not all market segments have suffered the same downside volatility. Not surprisingly, the segments with the largest upside performance relative to peers in the same segments have experienced the largest down falls. Russia’s invasion of Ukraine has caused several commodity prices to quickly spike. While commodity markets started to price in a complete removal of Russia’s supply, North Star expected that ultimately Russia’s commodity supply will not be cut off and instead redirected to other countries. Over the last two weeks as it has become more apparent that Russian commodities will likely still be sold to various countries and commodity prices have started to stabilize. Over the last few weeks, oil prices have fallen ~16% from 2022 highs and are now recovered to ~11.7%. The decline of nickel (a key ingredient in stainless steel and electric vehicle batteries) has been slowed by market circuit breakers. Circuit breakers were created to ensure an orderly market by limiting the amount of downside fall that stocks and commodities can experience on a daily basis. 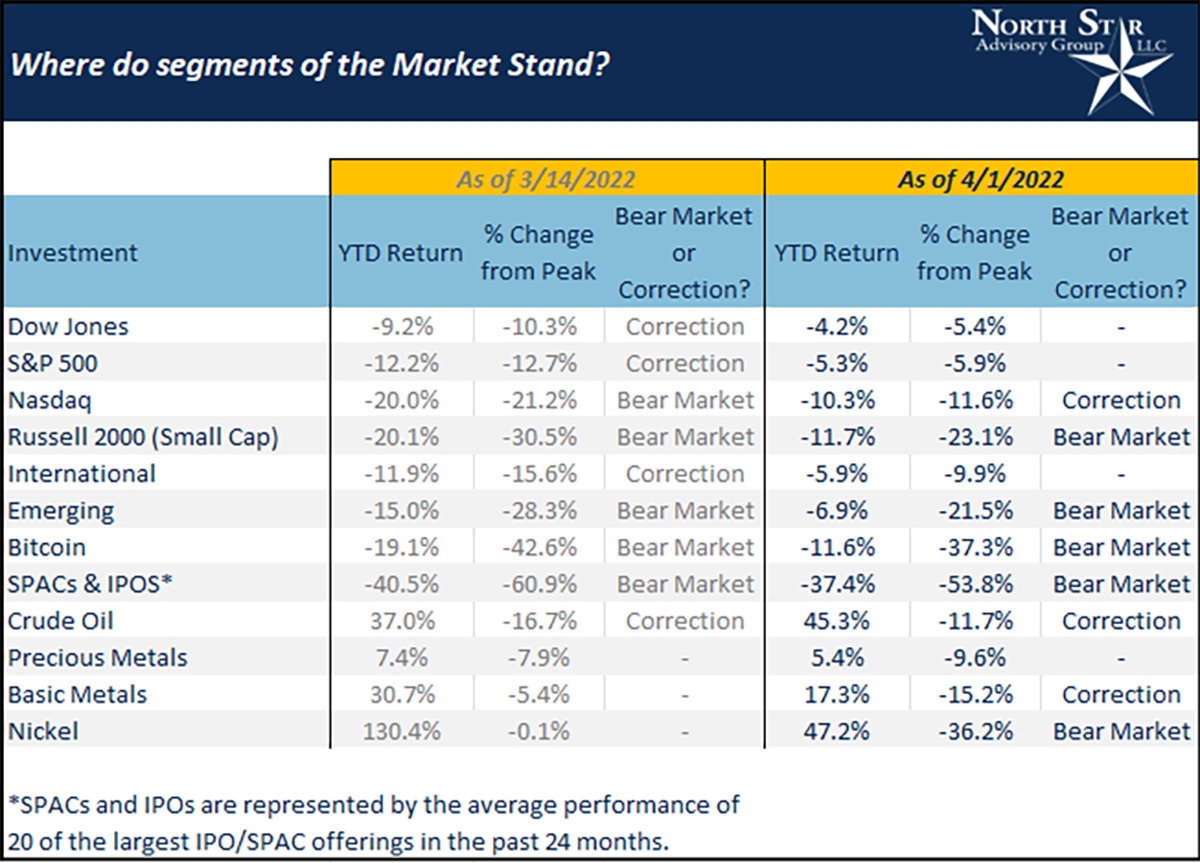 March 2009 marked the 13th anniversary of the Financial Crisis lows. At that low and near the low of every other bear market and correction, the way out wasn’t obvious. It never is.

Exposure to the next potential conflict

Several clients are concerned about the risk of further advancement by Putin and have inquired about the economic exposure to other eastern European countries. In the following table, we breakdown stock revenue across various segments that are earned in Russia, Ukraine, and eastern Europe (NATO vs. non-NATO members). Purely speaking from an economic perspective, the complete takeover of all non-NATO countries in eastern Europe would not lead to a significant impact in revenue to companies in our portfolios. If Putin is successful in Ukraine and if he continues with similar invasions across non-NATO countries, we may still not see a significant impact to corporate earnings solely based on revenue. However, depending on how the world applies sanctions, we could see significant impact to inflation and raw material costs which could hurt corporate profits several quarters out. However, companies have done a good job of protecting profit margins by passing along price increases to the consumer which has been feeding into the recent inflation measures. As we discussed above, the willingness or dependency of other countries to continue to buy Russian commodities will help to limit inflationary pressure on commodities in the long run. 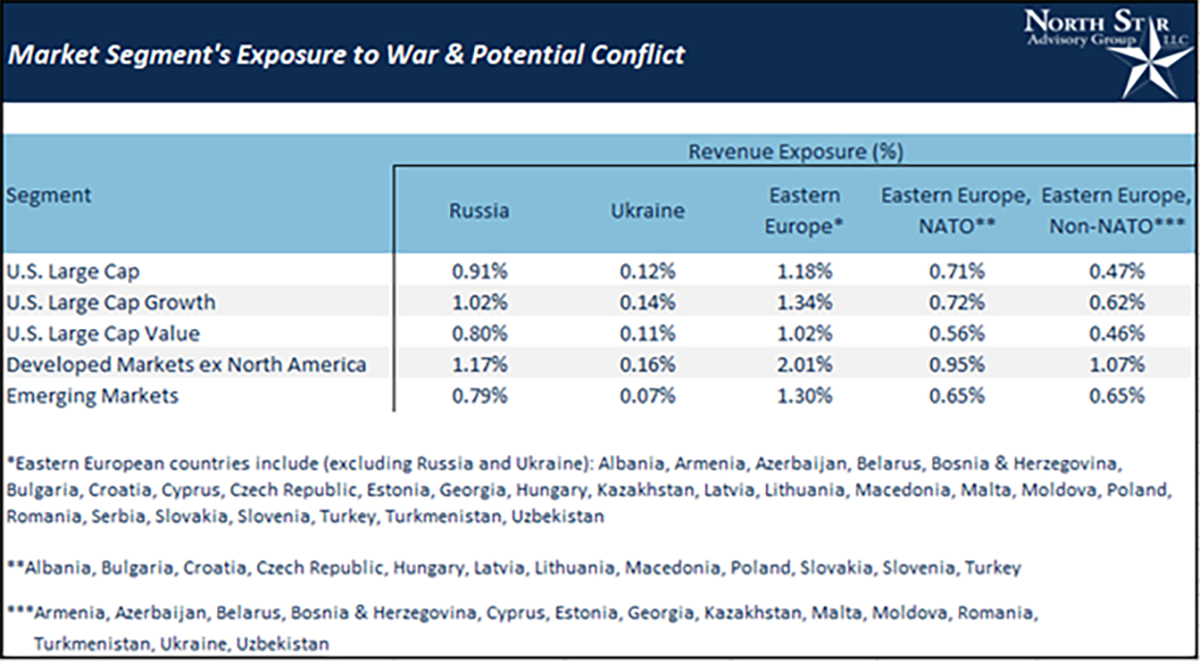 Consumers are spending less on oil every day and are coming off a few years of record savings levels. Both of these patterns have created an environment that may lessen the likelihood of a recession and prolong the economic expansion.

In the past, when we’ve experienced a spike in Core CPI (Inflation) and commodity prices, a recession typically follows. A rise in commodity prices rise can have an impact on consumers wallet and gas/oil prices tend to be the most visible. It is important to note that even with the current rise in oil prices, gasoline and energy expenditures are currently at 2.3% of household spending. Looking back over 50 years, this level of spending remains well below spikes before prior recessions, which may lessen the likelihood of higher oil prices creating a recession. This statement is illustrated in the chart below, as the amount of money spent on gasoline and energy goods as a percentage of Total Personal Consumption Expenditures, measured by the Bureau of Economic Analysis (PCE), has been in steady decline. We’ve seen a spike in this value since the Covid-19 lows, but we are still historically low. The U.S. is considered a service-based economy, and as of December 2021, total services still make up just over 65% of household spending. 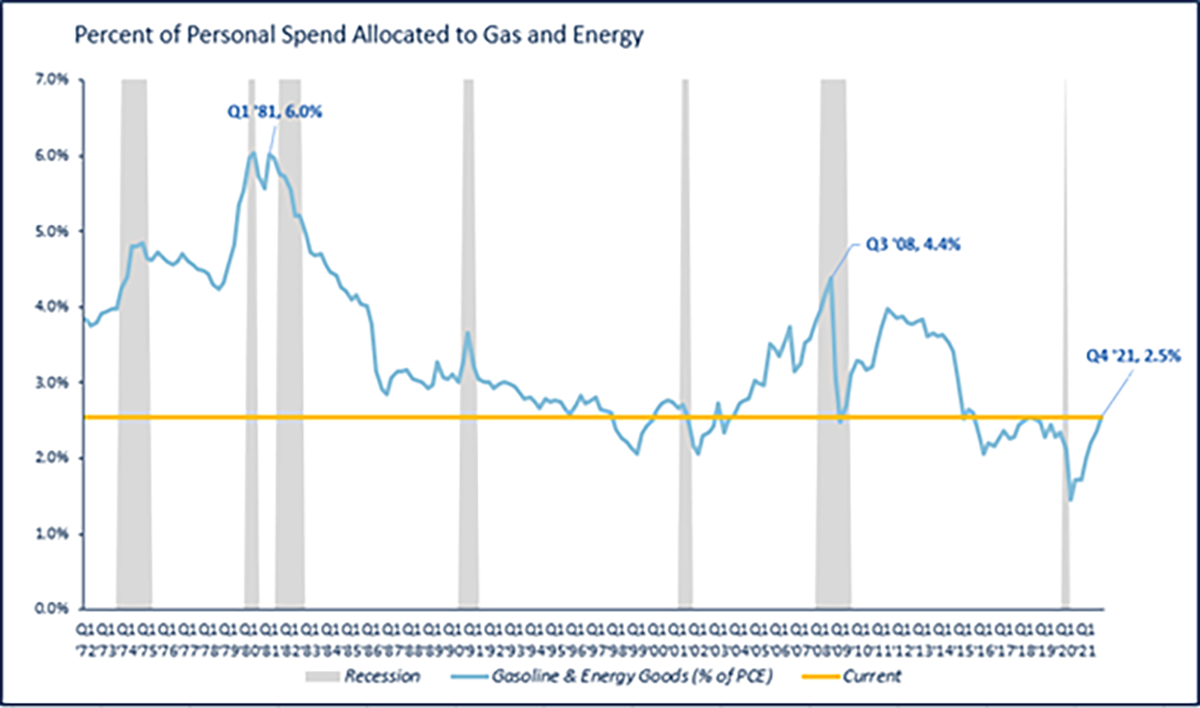 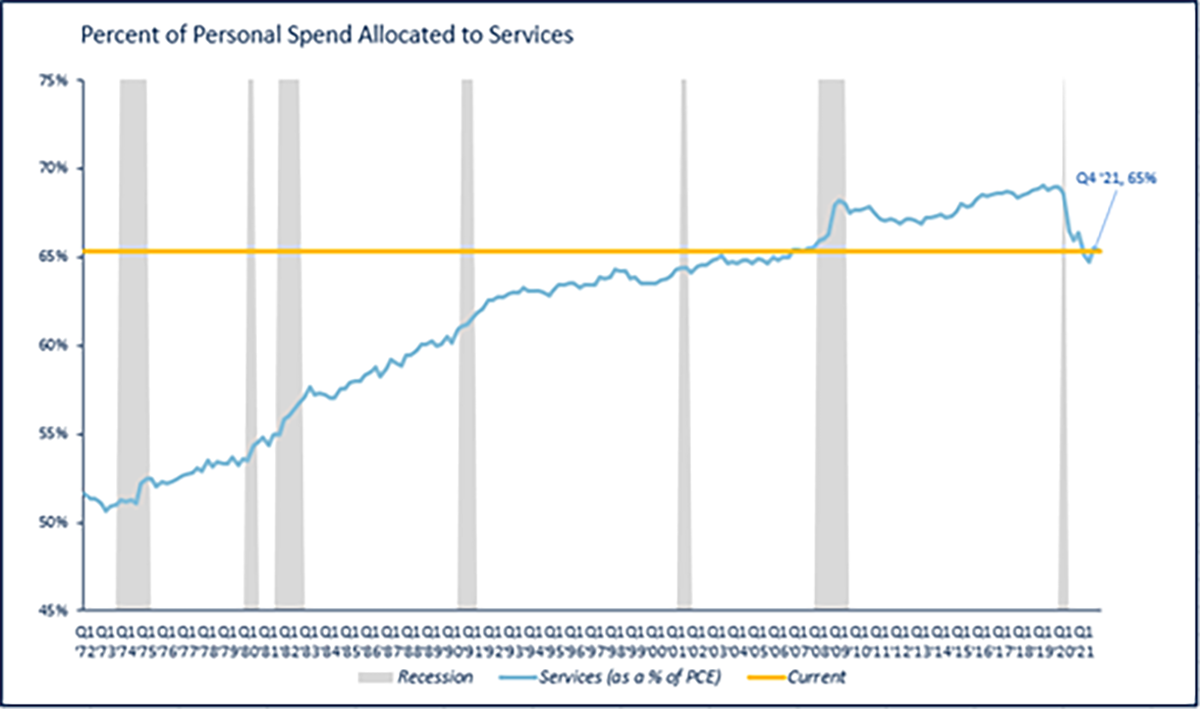 Covid-19 created, or forced depending on how you look at it, the largest increase of household savings in the past 50 years. As displayed in the following chart, Covid-19 created a period where consumers created record periods of savings. The amount of cash on household balance sheets and the pure desire to travel will likely create an environment where higher commodity prices are less likely to create a recession. 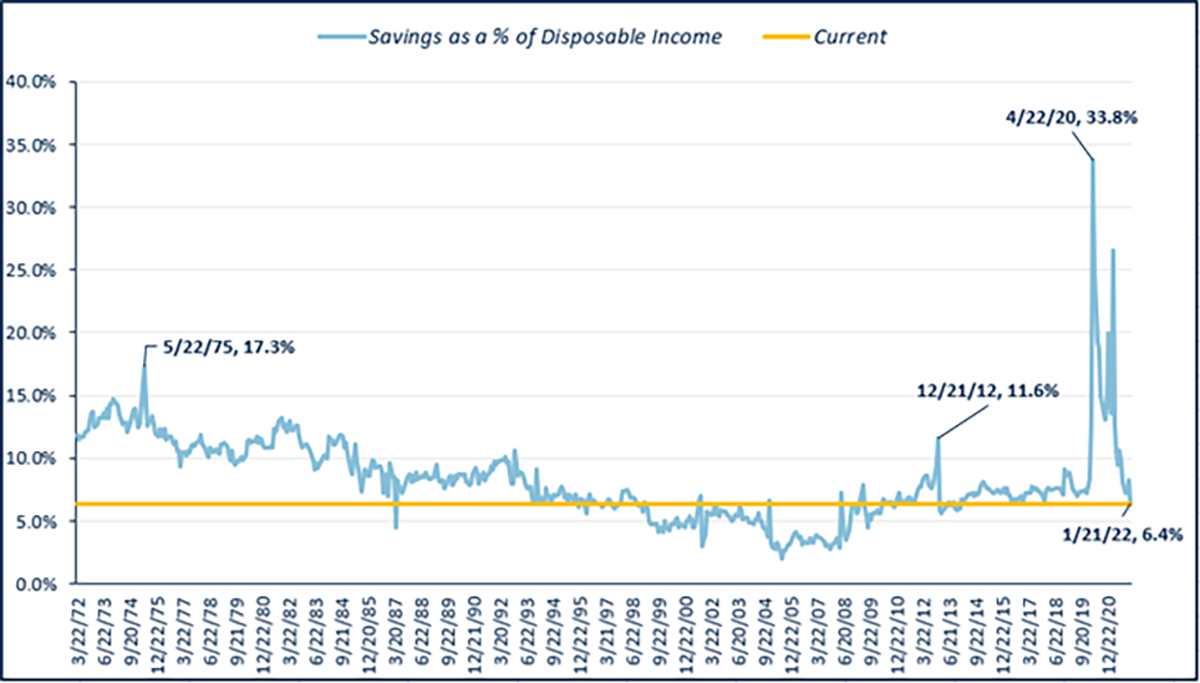 After reviewing consumer spending on commodities and savings patterns, we next dive into the consumer balance sheet. As shown by the following chart, in spite of recent consumer spending, household cash (deposits) has continued to climb to 50-year record levels and now sit at 15 trillion dollars. 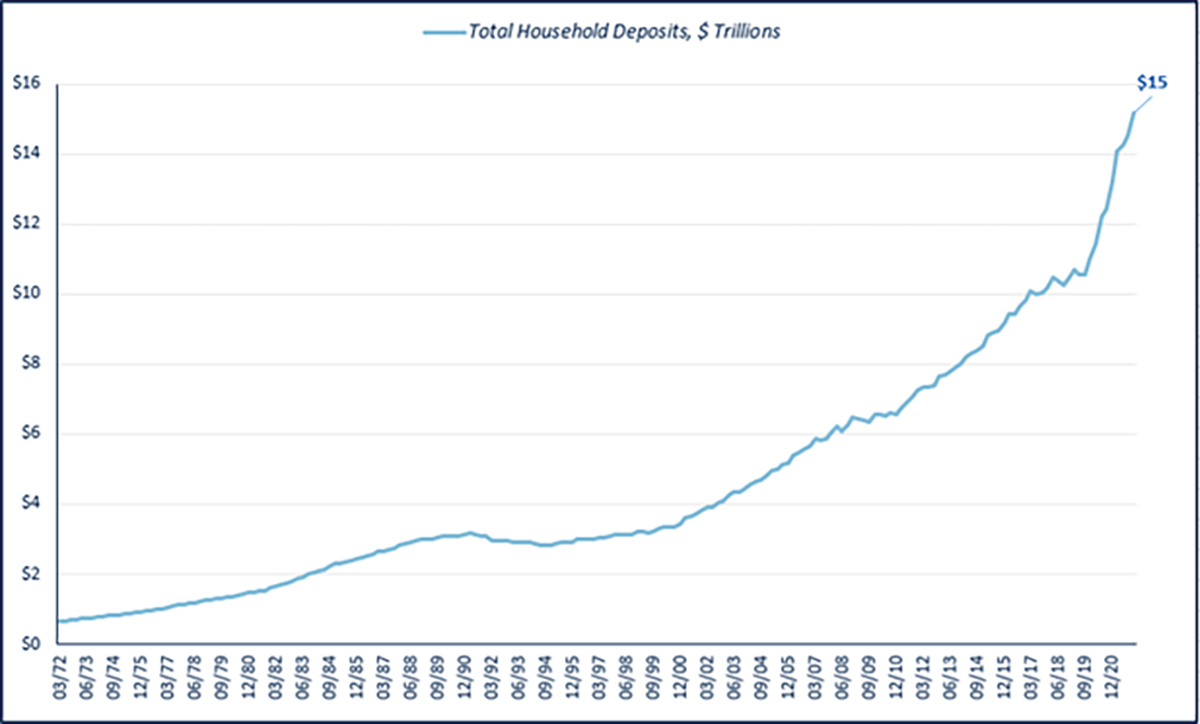 Looking over the past 20 years, we can also see that consumers have significantly reduced household debt for revolving credit, student loans, auto loans and credit cards. While mortgage loans may not have significantly reduced, the recent fall in interest rates has reduced the amount households are spending on mortgage loan interest payments. Mortgage loans have remained within the range of 67 – 74% of all liabilities over the last 20 years (Currently: 70%). As for the remaining liability accounts, student debt and auto loans have increased, while revolving credit and credit card debt have decreased. 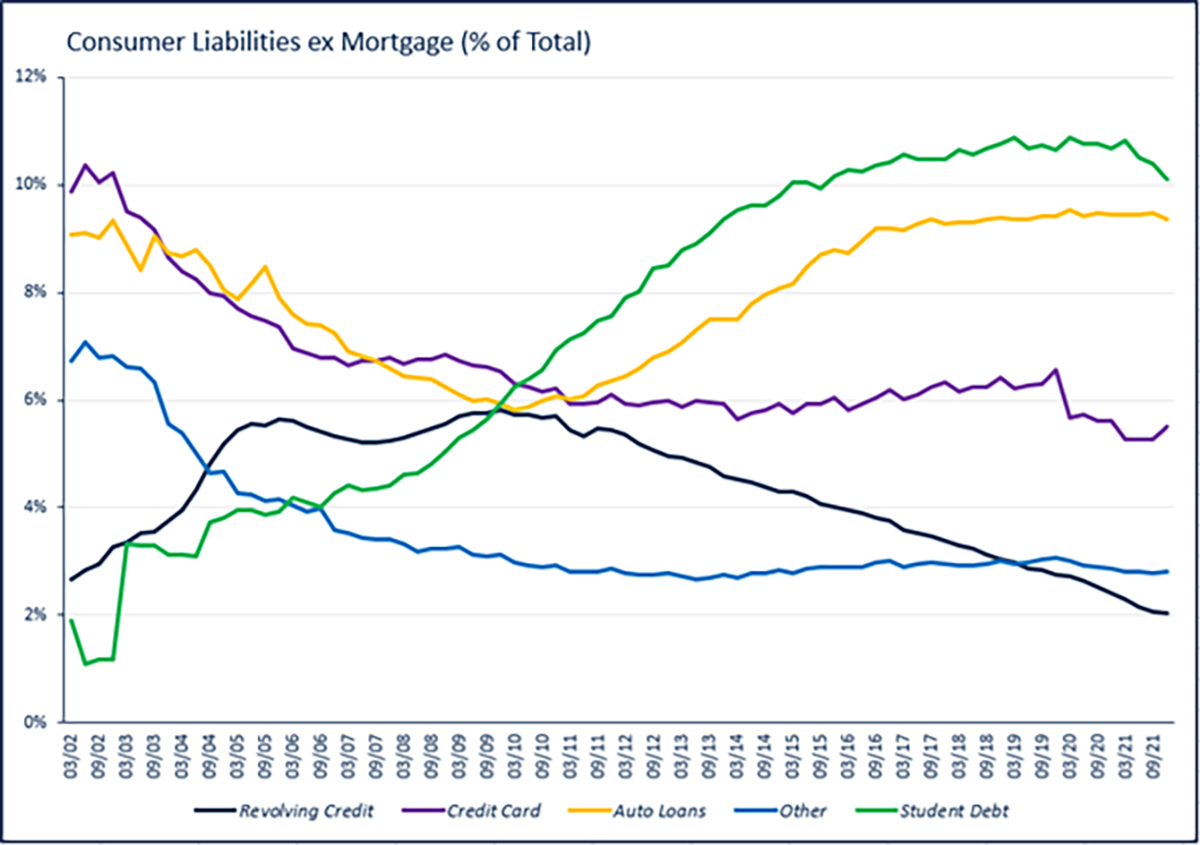 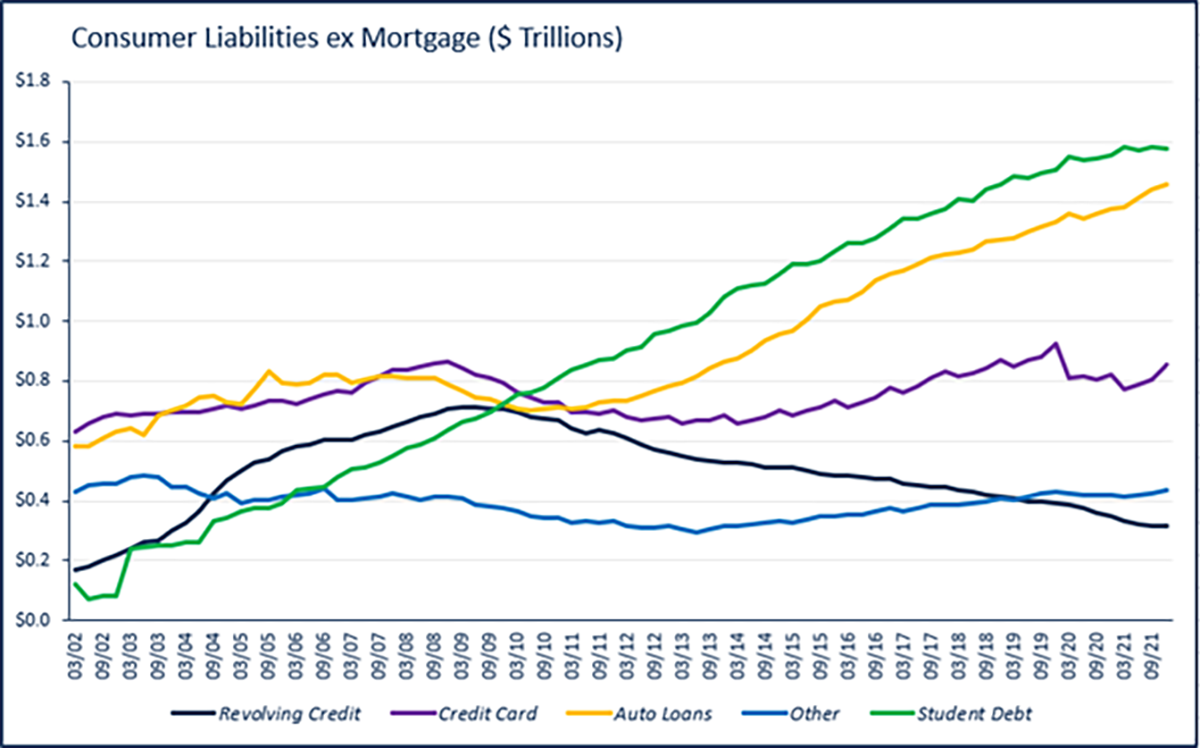 In 2021’s Timely Topics, we twice wrote about market volatility which is featured in Raising your investor IQ.

Each month we continue to expand, refine and update Raising your investor IQ. This month we encourage clients to explore and find a slide that they have not paid attention to.

Before we look forward, lets recap where the year is so far. Last month we reviewed the S&P’s history of an annual correction of 7-12%. The following table breaks down several sectors of the US Markets.

Properly diversified portfolios have done a great job of weathering the storm and reducing downside volatility. Markets rallied on clarity from Chairman Powell on March 16. While Powell signaled that he is foreseeing 7 more potential rate hikes this year, he was clear to state that The Fed was willing to move faster or slower as the economy could withstand. In the week of March 21, several of The Fed board members openly discussed the desire to pull forward a few future hikes to help soften current inflation concerns. The fear of uncertainty has caused many investors to likely overreact and oversell. As of Mid-January, we were seeing the NASDAQ and S&P 500 being oversold. The S&P 500 remains at levels higher than it was before the Russian invasion of Ukraine. The market’s ability to maintain the recent lows in January could mean we are close to a near-term bottom if the specific oversold sectors of consumer services, consumer discretionary and/or technology can gain some traction.

We continue to see significant pullbacks focused in areas of speculation and those impacted the most by rising interest rates. The continued rotation from growth to value is likely to continue for at least the next year and is picking up steam as interest rates rise in connection with either COVID variants slowing down, rising inflation or both.

Even with the risk of Ukraine and rising sanctions, there continues to be virtually zero risk of a recession. As noted above, the Federal Reserve is prepared to speed up or slow down rate hikes when necessary, and consumer currently have strong balance sheets. As a reminder, a recession is approximately six months of negative GDP. Even with The Fed raising rates, virtually no economists are forecasting negative GDP figures resulting in a recession. Less growth does not equal a recession. We still believe we are in a secular bull market, which started in 2010 and typically lasts around 15-20 years. However, this secular market is likely to last longer due to a slow start in 2010-2013.