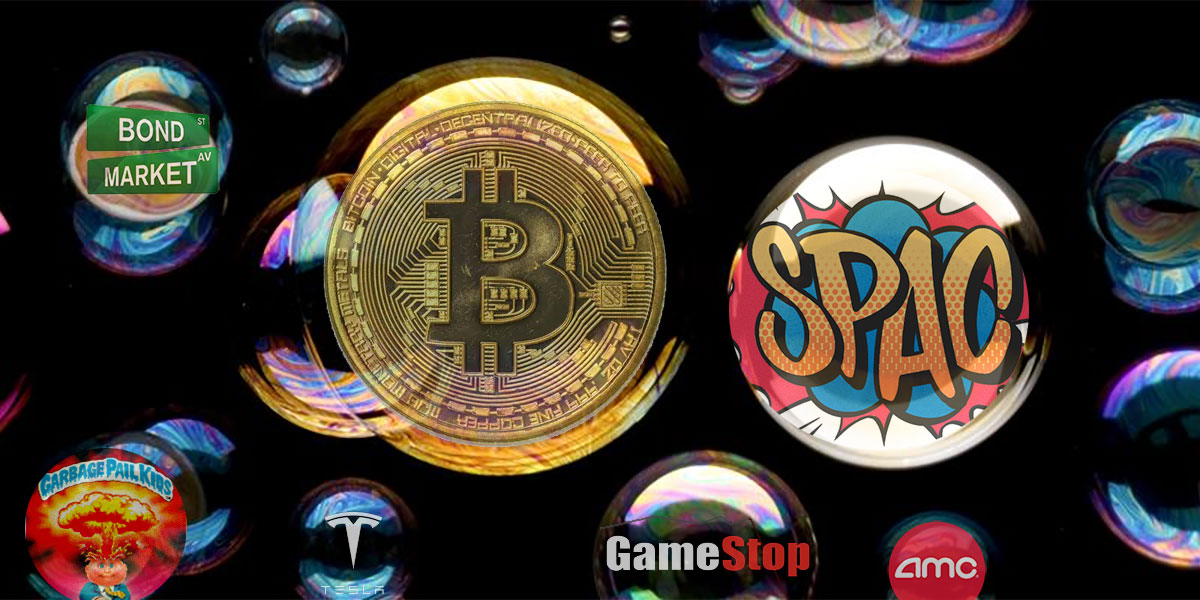 Each month we ask clients to spend a few minutes to read through our newsletter with the goal of raising their investor IQ. To properly address client questions on bubbles and their potential impact on the markets, this month’s Timely Topics is a long one. Enjoy!

While current client questions are different, many of them are focused on the growing concern of seeing asset bubbles all over the world. This month we focus on past bubbles to provide perspective and highlight a few current bubbles we see popping up. Finally, we will tie it all together with our thoughts on the potential of a widespread stock market crash.

“It seems like there are multiple potential bubbles...the tech industry, GME/AMC stocks and Robinhood, Bitcoin/Dogecoin and Elon Musk ‘moving the markets’, card collection for sports/Pokémon/Magic, metals gold/silver prices rapidly increasing, sneaker flipping and the housing market. I’m not sure if buying into any of these things to make a profit is any less risky than the casino but something new seems to be in the news all the time. Are these bubbles? Just another high-risk money pit?”

Every couple of years new bubbles form and draw in speculators. With discipline, research and a well-defined process it is possible to invest, buy and sell prudently during a bubble. An asset bubble is when an asset dramatically rises in price over a short period that is not supported by the value of the product. The hallmark of a bubble is irrational exuberance—a phenomenon when everyone is buying up a particular asset. Irrational exuberance is unfounded market optimism that lacks a real foundation of fundamental valuation, but instead rests on psychological factors. Markets and economies have survived previous bubbles and the ones we are experiencing today are not near the magnitude of the ones that we have experiences in the past.

While this is not an all-inclusive list, we hope it gives you a good handle on what we are seeing. Across many of these categories, North Star is seeing clients, friends, neighbors and personal trailers exchanging hot tips for places to invest for a fast return. Some investors have and will be successful, but unfortunately many will get hurt when participating in bubbles like these. Thankfully, many of these bubbles are smaller in size and while they may have a similar short term impact on the market like we experienced with Game Stop earlier this year, fundamentals are still strong and should help equity prices correct in a relatively short period of time.

The million dollar question is “when will these bubbles start popping.” My best guess is the second half of 2021. To pop the bubbles, you have to take the cash away that is supporting their growth. These bubbles are being supported in three ways:

In late February, Powell stated “the economy is a long way from our employment and inflation goals, and it is likely to take some time for substantial further progress to be achieved.” However, he said yields are rising both because of higher inflation expectations as well as anticipation for a pickup in economic growth later this year. “It’s a statement of confidence by markets.” In spite of the Fed’s goals for inflation and employment, we may start to see rates slowly increase, which may cause losses for bond investors.

The outlooks for equities is increasing while decreasing for bonds

As the pre-pandemic days start to fall further in the past, one-year charts of various financial assets are starting to look a lot different. Take the yield on the 10-year US Treasury. Along with the fact that yields are rising, the higher levels of rates from before the pandemic are falling out of the one-year window. Through that combination of events, today's yield of 1.3721% would mark a 52-week high on a closing basis. It's been a while since we've been able to say that! As if the chart doesn't look interesting enough now, wait until late March when the down leg falls completely out of the picture. 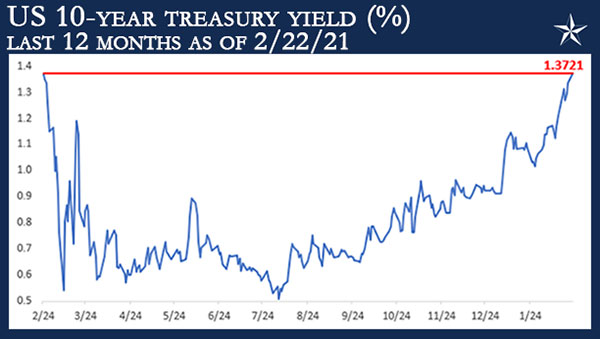 All of this is generally good news for stockholders since it is due to a strengthening economy. However, it is not great news for holders of bond funds with longer maturities. North Star’s clients are generally invested into short-term bonds and are therefore more immune to this type of price movement. While the intermediate bond funds are generally down year-to-date, our short-term bond holdings are showing a positive return in spite of rising rates.

Rising interest rates can put pressure on high growth equities and our portfolio managers have already started to reposition the portfolios in preparation for this pending risk.

The mental and financial scars from the boom and bust of technology stocks in 2000 have investors worried about a risk of this type of market crash repeating. North Star foresees this type of crash coming, but isolated down to assets that have recently increased in a parabolic manner. Due to the increased speed of technology, we expect the speed of the fall is likely to be faster than the slow three-year bleed that took place in the early 2000s. Lets take a quick look at what happened to the NASDAQ in the late 1990s as an example of what could happen today, just in a faster fashion.

Part I, the crash in 2000… The same investors that thought they couldn’t lose by investing into tech stocks learned a very sobering lesson after the clock struck midnight on December 31, 1999. During 2000, the NASDAQ fell -37% while the Russell 1000 Value was up +7%.

As illustrated by using the NASDAQ, this -74% crash impacted a lot of companies. In contrast, the use of the Russell 1000 Value shows that there was a whole part of the market that was relatively immune to the “crash.” Technically speaking, the 15% pullback in the Russell 1000 Value does not even constitute a bear market. North Star is not a firm that only invests in value or growth. North Star’s investment process focuses on investing into assets for growth at a reasonable price/risk. Therefore, our clients should experience a lower risk from a crash after a parabolic move up.

The markets have their growth hopes squarely on the shoulders of the vaccination rollout and consumers leaving their house. For March, we are going to cover how the overall strength of the economy will be supported by consumer balance sheets, Tech IPOs and pending US real estate vacancy rates.

We are seeing a psychological shift in society from despair to hope. This transition is common after a natural disaster. In December 2020, we were seeing a growing probability of the S&P 500 hitting 4,200 by the end of the year 2021. The breadth of the recovery we are seeing for the balance of 2021 along with some technical analysis, may see the S&P 500 exceed these numbers. While the path forward will not be a straight line, we expect any pullbacks to be modest and focused on areas of bubbles.

The markets should continue to be supported by the Federal Reserve, stimulus from central banks around the world, cash on the sidelines, low interest rates, recovering earnings and investors who overallocated to bonds. The 2021 economy is proving stronger than anticipated. Estimates are indicating that real GDP will rise at about a 6.0% annual rate in the first quarter, and grow about 5.0% (Q4/Q4) in 2021. Yes, we know that the Atlanta Fed’s GDP Now model projects a 9.5% growth rate for Q1, but that model has been overestimating growth since the recovery started and doesn’t factor-in the polar vortex that has wreaked havoc throughout much of the mid-section of the country in February.

Either way, it’s now clear that there is virtually zero risk of a double-dip recession. In fact, a new $1.9 trillion stimulus bill is winding its way through the legislative process. This massive package includes a further extension of unemployment benefits, direct help for households and businesses, more money for vaccinations, $350 billion for state and local governments, and $170 billion for education. Putting this all together, we still believe we are in a secular bull market, which typically lasts around 15 years.