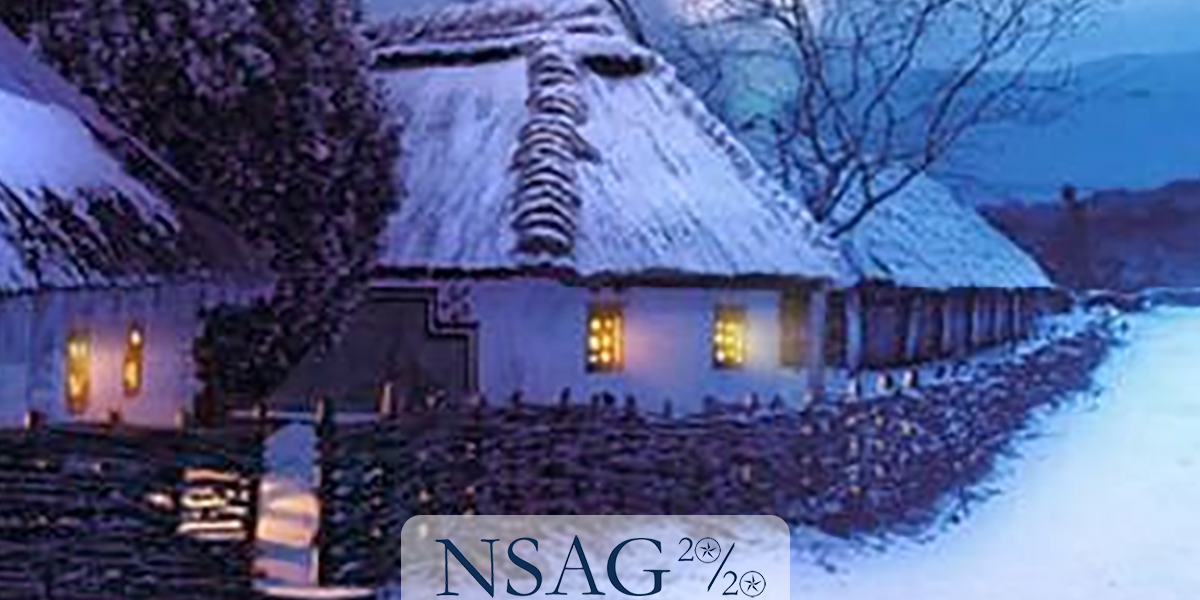 Each month we ask clients to spend a few minutes to read through our newsletter to with the goal of raising their investor IQ. What should investors be focusing on this month?

I am humbled by the continued support, trust and referrals that North Star has received through 2020.

For years, we have been prepared for the worst and our disaster plan worked flawlessly in 2020. I have always stated that “the time to prepare for a crisis is before, not during.” Now with the ability of hindsight, we can also see our portfolio guidance was spot on. Finally, while we have been faced with the countless challenges of COVID, the general well-being and happiness of our staff is at the highest levels we have ever experienced.

It has been a long year.

Deepest recession since the Great Depression

There have been worse years in the market, economy, U.S. history, and certainly worse years in world history. Most of us alive today have seen nothing like 2020 and hopefully we won’t ever again. Based on our research, companies that were hardest hit were not publicly traded, already in financial duress and unprepared for a cash flow problem. Investors who panicked and pulled out of the market were also harder hit than those who remained in. That's certainly not to say that prepared businesses and investors weren't hit at all; it was a tough year for many.

Next stimulus package should pass before year-end

Democrats have been holding out for a huge, potentially $3 trillion dollar bill, while Republicans are looking at debt in the years ahead and suggesting that too much spending would create economic problems down the road. Nonetheless, a deal somewhere between $900 billion and $1 trillion appears likely to pass before yearend. Just two weeks ago, we didn’t expect a deal before Biden’s inauguration.

The details are still up in the air, but we’re confident anything that gets passed will include (among various other provisions) enlarged and extended unemployment benefits, more help for small businesses, some sort of liability shield to protect businesses from being held liable for COVID-19 infections, as well as some aid for state and local governments.

US Dollar should provide a tailwind for international investments

What a year it has been for the US Dollar. At the height of the pandemic, flows into the dollar surged as investors sought safety in the uncertainty. At its peak in March, the US Dollar Index surged to its highest level in over three years (January 2017). As concerns over the pandemic eased, though, all of those inflows quickly unwound, and now less than nine months later, the Dollar Index is trading at its lowest level in more than two years (April 2018). 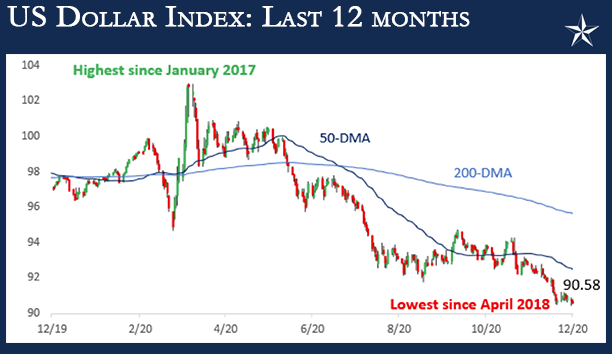 While pot stocks or emerging market currencies have no problem with swinging wildly from multi-year highs to multi-year lows in a matter of months, for an asset like the US Dollar, moves of this magnitude are much less common. The chart below shows the number of days in each year that the US Dollar Index has closed at a two-year high (blue bars) or a two-year low (red bars). Going back to 1973, a period spanning nearly half a century, there have only been three other years where the Dollar Index has closed at two-year highs and two-year lows in the same year. Those years were 1985, 1994, and 2008. 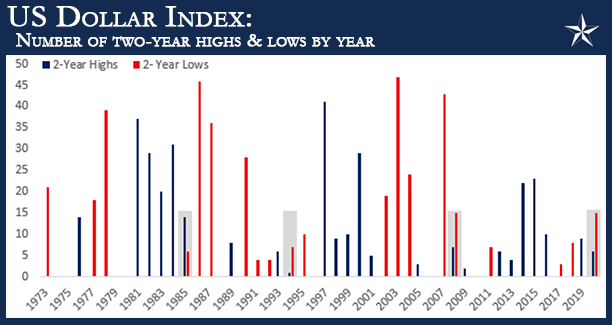 While the pandemic rages late in 2020, good news on vaccines should support equity markets early in 2021 and trigger surging economic growth later in the year. Until then, we expect continued monetary and fiscal support which will be critical to stabilizing the economic recovery and supporting households and businesses. The following are our six themes for 2021:

Wall Street analysts see the world economy surging in 2021 after a slow first few months of the year. The pent-up demand and inventory rebuilding are expected to support continued growth for equity valuations. While 4,200 appears to be the middle of the road target for 2021, it represents a 15% increase from current valuations. Deutsche Bank’s market forecasts during COVID were wrong and it is another reason why we discount the high- and low-end predictions.

Domestically, Small-cap, Mid-cap and value stocks have done better than large-cap growth over the last three months and this trend could continue into 2021. These companies have sustained a lot more damage from the pandemic and may gain more when the economy returns to normal.

Looking outside the US, JPMorgan recently said that emerging markets are currently ‘under owned;’ we could see emerging market stocks rally as much as 20% in 2021. Our prior comments on the US Dollar movement are also supportive of this potential growth. We follow global high-frequency economic activity through mobility data. With the exception of India and Mexico, most emerging countries currently have a higher level of retail and recreational activity when compared against developed countries. Generally warmer climates and a higher level of activity should be more supportive to their economies during a rough COVID winter in many developed countries.

Looking long-long term… JP Morgan recently stated that they could see the S&P 500 at 10,000 in 2033. We have seen similar long-term projections from other firms. While clients are shocked by these numbers, it only represents an 8% compounded rate of return. Maybe investors need to start thinking long-term and look through short-term volatility.

Bill Clinton, our nation’s #42 president, left office in January 2001 or 20 years ago next month. Clinton, age 74, is 4 years younger than 78-year-old Joe Biden, our nation’s #46 president who will take office on 1/20/21. Donald Trump, our nation’s #45 president, is currently 74. It is no wonder Democrats, Republicans and Independents are looking to the next generation to develop the next round of leadership in Washington.

We still believe we are in a secular bull market, which typically lasts around 15 years. Historically, it is not uncommon to have a bear market (which essentially occurred in Q4 of 2018) or even a brief recession (which we may be experiencing right now) during a secular bull market. Vaccine deployment is going to take the headlines for the next few months as we head into a really rough patch of time for the economy. On the bright side, it should be short lived and we should have a strong second half of 2021.