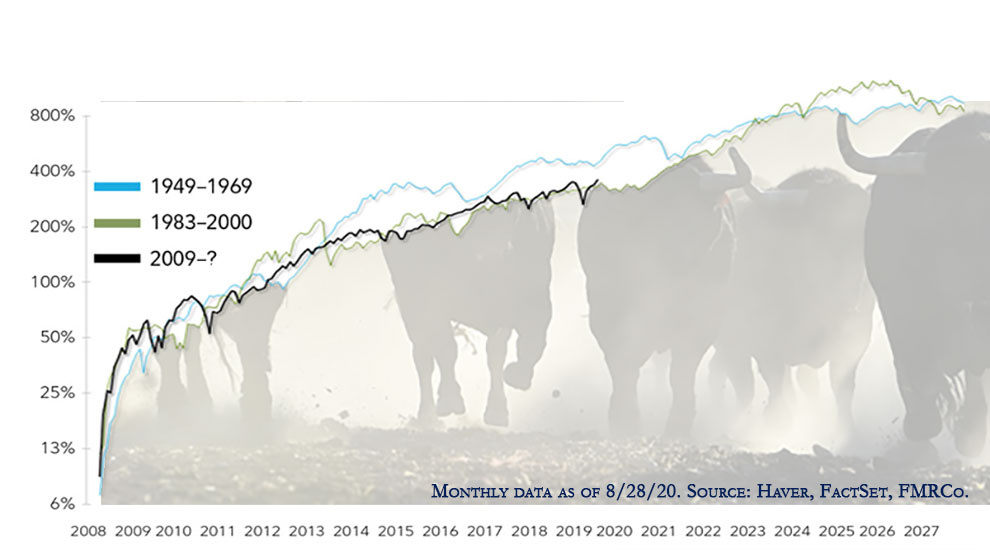 Prior to starting North Star in 2013, Kangas was writing clients in 2010 to educate them on the likelihood that we have entered a secular bull market. We have not wavered from this viewpoint and this has been one of the many reasons why we expected the market (and eventually the economy) to be so resilient during the last few downturns.

On September 1, 2020, Fidelity’s Director Jurrien Timmer, who is their specialist in global macro strategy and active asset allocation, published an article titled, “5 Reasons the bull market could continue.” (Click HERE to view in its entirety.) The article has a few great charts, including one showing bear market bottoms in various types of market cycles (hint, not all behave the same). The following are a few highlights from Timmer’s article.

Timmer and Kangas have both identified trends and used data to look through short-term volatility to help generate wealth. While there is always room to be tactical on a short-term opportunity, there is no place to let emotions change the course of long-term planning.

Client Question: If Presidential elections don’t matter for markets, what in this election does?

Last month we covered the Dow Jones Industrial Average’s (DJIA) return under every President since 1900 from the time they took office to the time they left. The findings showed that there was no clear advantage to either a Democrat or Republican president. In spite of these findings, opinions are all over the place.

Investment manager Howard Marks recently stated that the stock market will “breathe a sigh of relief” if President Trump is re-elected.

The Wall Street Journal recently wrote: “Get Ready for the Biden Stock Boom.”

Echoing the sentiment, The New York Times wrote, “Why a Biden Presidency Could Be Bullish for Stocks.”

Over the last week, we held calls with our political contact at Deutsche Bank and our Equity Income portfolio manager at JP Morgan. On both calls we had a similar conversation about the pending election. Equity market risk is being misplaced on a Trump vs. Biden victory. The true risk is around a contested election. Lets look a scenario where this can playout…

In June, the odds were rising for a Biden victory in November as he has opened up a 10%+ lead. In September, the average of the national polls has since decreased to a 7.5% lead. However, if you start looking at the following current data at battleground state level, you see Biden’s lead is even less.

Next, we look at a relatively new phenomenon called the “Shy Voter.” The shy voter is where a voter is not telling the truth to their family, friends and pollsters on who they are going to vote for. Current estimates by Deutsche Bank are that 10% of Independents and 6-7% of Republicans are saying they will vote for Biden, when they in fact plan on voting for Trump. The United Kingdom experienced a similar shy voter issue with Boris Johnson. If this theory is correct, the Trump could receive enough shy votes to make this election much closer than the polls are showing. This is where things get interesting for a COVID election year. It is expected that the US will be utilizing a higher than normal amount of mail in votes. Historically, more Democratic voters utilize mail in voting compared to Republicans. This sets the stage that Trump could “win” the election based on Polls closing on election day, yet Biden could retake the lead when the mail in votes start to get counted!

In this scenario, unless Biden wins by a big margin, it is highly likely that Trump will challenge the election results based on the postmark on each mail in vote. A Trump election night win, a delayed Biden mail in victory or a split popular vs electoral college victor could all lead to rioting. It is this drawn out contested election with rioting that poses the biggest risk to the markets. It would not be unreasonable to see a brief 20% correction. Call us if you would like to discuss strategies to limit downside risk.

For those that are curious, about 18 states will count your ballot as long as it’s postmarked by Election Day or the day before AND received in a few days. States are currently scrambling to clarify their rules. Here are a few notable changes:

Every vote should count as long as it is legitimately made. The argument already being made is that the postmark is the timestamp that legitimizes the vote, no different than the postmark when you file your tax return. Thankfully, the solution is easy. Voters who are worried about this issue are encouraged to mail their vote in early and take their vote to the post office so it can be postmarked in front of them.

This month’s polling numbers are provided by Real Clear Politics.

The holidays are coming & mail orders will be significantly impacted

While we are only in September, it is important to already start thinking about the holidays. While COVID has already cancelled holiday parties and altered travel plans for families, shopping will also be impacted. Many stores have already announced that they will be closed the day after Thanksgiving and will instead offer their 1-day specials for 30-days. Mail delivery will be impacted the most. The US is expecting record online sales for Q4-2020. Due to a higher than normal volume, shipping companies have already announced that buyers should be prepared for extended delays and increased shipping costs.

Therefore, now is a great time to start picking up those gifts for the special people in your life.

In July, we wrote a section titled “Mortgage rates are at record lows. Is now the time to refinance?” and referenced that while rates are low, they could drift lower over the coming months. Fast forward to September and we have indeed seen rates drift lower for mortgages and home equity lines of credit. During this low interest rate environment, it could be advantageous to refinance your mortgage into a lower fixed rate. Refinancing to a lower interest rate could potentially save you thousands of dollars & help you pay off your mortgage sooner. Rates can vary based on credit score, loan balance and term. As of September 9th, rates are as low as 2.375% for a 15-year loan and 3.0% for a 30-year loan.

While rates may drift lower, we have seen an uptick in clients locking in these record low fixed mortgages. We recognize that there are several factors to consider when deciding if refinancing is best for you. If this is something you would like us to review with you, we would be happy to help compare your options, potential savings or assist in finding a low-cost lender.

What to expect in November’s Election: A virtual client speaker for October

We are finalizing plans right now for a virtual guest speaker for Mid-October. We are happy to bring back Frank Kelly who is the Head of Government & Public Affairs for North & Latin America for Deutsche Bank. Frank has presented at prior events in 2015 & 2016 with North Star. During 2020, Frank has been on weekly calls with North Star providing insight into what is going on behind closed doors in Washington. The date and time will be announced shortly.

As we sit at new market highs, our vision and communication has not changed since 2010. We still believe we are in a secular bull market, which typically lasts around 15 years. Historically, it is not uncommon to have a bear market (which essentially occurred in Q4 of 2018) or even a brief recession (which we may be experiencing right now) during a secular bull market. Markets will trade on fear or momentum from time-to-time. In-between earnings reports, the markets may even trade on a single data point (like the new cases and death count of COVID-19). Eventually, the markets return to trading on fundamentals. We believe that fundamentals are starting to return. But the gains will be clouded until we get the first (or second) approved vaccine. Meanwhile the Fed and Treasury are doing a tremendous job of providing a financial bridge to get through the next few months.

We are passionately devoted to our clients’ families and portfolios. Let us know if you know somebody who would benefit from discovering the North Star difference, or if you just need a few minutes to talk.